To mark the 100th anniversary of the birth of R. Tudur Jones I had the privilege of delivering a lecture under the auspices of Ebeneser Church (Welsh Congregationalists), Cardiff. Here is a summary of what I said on the evening. It was written originally in Welsh and can be read in Welsh here. R. Tudur Jones was a leading Welsh Church historian and theologian during the twentieth century. In addition to his contribution to Christianity in Wales he was also a prominent leader of Plaid Cymru and is credited for giving Welsh nationalism a pacifist and polycentric foundation in contrast with other types of nationalism seen at the time.

The summer before I started my research in 2006 I remember going to a reception in the Bangor University tent at the Eisteddfod where the University were introducing me and a number of other students who had received scholarships and were about to start their studies. For those of you who are familiar with these receptions you will know that the red wine flows and flows freely, and towards the end of the evening I was cornered and challenged by someone who may remain anonymous: “R. Tudur Jones? Why do you want to do research into such a conservative and irrelevant figure?”

Fifteen years later the research area of ‘Christian Nationalism’ has become a very vibrant and important area as a result of the unexpected and unfortunate role that some religious leaders have played in supporting Donald Trump in the US, and to a lesser extent Brexit in the United Kingdom. What makes the developments alarming from a Christian point of view is that much of the growth in reactionary nationalism uses religious rhetoric. They have managed to sell their breed of nationalism as if it were ‘Christian’ nationalism.

A number of English-language books have recently been published discussing how so-called ‘Christian’ ideology has contributed to the growth of white supremacy, particularly in the United States. So, perhaps unexpectedly, R. Tudur Jones and the Welsh tradition of Christian Nationalism have much to say to the world and society today. The anonymous challenger in Bangor University’s reception was wrong – R. Tudur Jones is still relevant!

Before proceeding, it is important to make one thing clear: nationalism cannot be endorsed un-critically from a Christian point of view. Depending on its nature it can be opposed or embraced. Nationalism is an empty ideology – that is, it is not an ideology that can stand on its own feet like, say, Marxism. Nationalism has to adopt other ideologies in order to be meaningful.

So from a Christian point of view it is impossible to oppose or embrace nationalism without first questioning what kind of nationalism we are talking about?

It is clear to everyone that nationalism can become an idol, especially when it is linked to other ideologies such as fascism and racism. The culmination of this kind of nationalism was seen in Nazi Germany. But also in the attitude of the British Empire and other Western countries overseas. And more recently in the “Christian” nationalism of the USA where majority of “white evangelicals” supported Donald Trump.

One of R. Tudur Jones’s greatest contributions was to help us see that healthy Christian nationalism can exist, a form of nationalism that promotes and celebratea minority cultures such as Welsh culture. Not only can the kind of nationalism that developed in Wales be tolerated by Christians; but it should be embraced as a means to protect and nurture the kind of humanity and creation that God had intended from the beginning. A beauty of humanity that shows unity in diversity.

What about nationalism in Wales today?

For those of you who have been following the developments of the national movement in Wales over recent years you will be aware that there has been some conversation about the decision of the YesCymru movement to remain neutral when it comes to a range of specific political questions. They are pro-independence, but beyond that they are deliberately ambiguous to try to be wide-ranging in their appeal.

As a result they have been criticised for not being clearer about the kind of Wales they would want the independent Wales to be. It is the ambiguity here that has led to the establishment of other organisations such as Undod. Undod is also campaigning for independence, but doing so from a clear platform of left-wing politics.

In following these developments over recent years I have been scratching my head asking: what would R. Tudur Jones have to say about this? In particular, what would he have to say about the danger of supporting nationalism or a movement uncritically? And I wonder whether he would call on YesCymru to be clearer about what the ideological and philosophical bases of their political belief was?

By not being clear about what independence is for and what the ideological basis of your nationalism is then the “cause” risks becoming an end in itself, or an idol if you wish. In the same way that R. Tudur Jones offered an assessment and criticism of the philosophical bases of Adfer in the 1970s, I think that it is our responsibility as Christians today to scrutinise organisations such as YesCymru and Undod as well. Not in order to undermine them – quite the contrary – because we support them and wish them success. But we wish them success rooted in a robust ideology as a way to create a fairer Wales that better reflects the values of the Kingdom of God than the situation.

The second reason that R. Tudur Jones continues to be relevant is because he discussed the influence of Evangelical Christianity, and particularly the influence (or lack thereof) of that tradition on the political sphere. In considering the leading role that many “evangelical” Christians in the USA had in promoting Donald Trump’s so-called Christian nationalism it is fair to turn our sight next to the state of Evangelical Christianity today.

In 1995 he published a pamphlet entitled: ‘Who are the evangelical people?’ One of the most interesting things in it is a table explaining the difference between ‘fundamentalism’ and ‘evangelicalism’. The most relevant point to this discussion about nationalism is that he sees fundamentalism as: “allowing their culture to influence their beliefs. For example, some of them support racism or adopt the reactionary policies of the right in politics.” On the other hand evangelicals: “Seek to give the Bible the opportunity to challenge and critique culture including their own culture.”

As we try to make sense of the confusion that came to its head with the majority of US ‘white evangelicals’ voting in favour of Donald Trump’s ‘Christian Nationalism’ I think the way Dr. Tudur distinguished between ‘fundamentalism’ and ‘evangelicalism’ is helpful. Or, to put it another way, when many talk about “evangelicals” today, in fact they are refering to “fundamentalists”.

Firstly, because it has been too busy offering criticism of other traditions, notably theological liberalism. I remember reading an article once titled “Evangelicalism has no right wing border.” The article’s thrust was to point out that the evangelical tradition protects its left wing border like a hawk, yet it’s ring wing border is like the wild west; and that is where fundamentalism has taken root. As I have said before: evangelical Christianity is not the problem but Evangelical Christianity has a problem.

From my experience the main obstacle for people in Wales today to see the glory of Jesus is not the confusion of last century’s Liberal theology but rather the theological hardness of this century’s fundamentalism. And so the evangelical tradition should make greater efforts in responding and condemning fundamentalism tendencies, especially within it’s own family.

The main threat to the mission of the Christian church at the turn of the twentieth century, as was masterfully explained by R. Tudur Jones in his book Faith and the Crisis of a Nation, was theological liberalism. But by the turn of the 21st century it is fair to say that fundamentalism is what creates the greatest confusion.

The second reason why the evangelical tradition is slow to offer self-criticism is because it’s correct emphasis on unity among evangelical people. But this has led to an ecclesiastical culture where people cannot or do not know how to discuss differences in a constructive way. This is, to an extent, because people who hold a conservative position cannot live with the tension that there are other valid views outside of their own. The framework of conservative theology does not allow the space for the paradox that sometimes there is more than one correct answer. This is why some of the more progressive voices within evangelicalism – from Steve Chalk to Tony Campolo – get thrown out by the conservative wing – while fundamentalist voices are allowed to stay within the family.

Rev. Dr. Rhys Llwyd leads a Welsh speaking Baptist Church in Caernarfon, North Wales – Caersalem. Previously he studied for his doctorate in Bangor University where he looked at Christian Nationalism from a Welsh theological perspective. 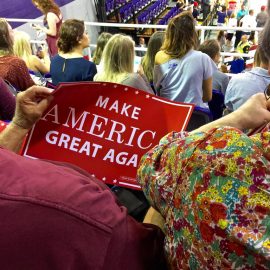 QAnon, Christian apocalypticism and the threat to US Democracy